The Indigenous Peoples of the Americas - Part 3

In this part of our biography podcast, we look at one of the Indigenous Peoples of the Americas who rose to power quickly as the dominant force in Central America - The Aztecs

Would you rather read about the Aztecs? Click here: Aztecs. If the link doesn't work, copy and paste this URL into your browser - https://wisuru.com/history/aztecs/

One day, one of their gods asked them to move south, because that's where their real home was. So, they started migrating South. He also asked them to change their name to Mexica and they did so. Thus, the Aztecs became Mexica.

Then, he told them to look for a sign - an eagle sitting on a cactus fruit. If they found this sign, they should settle there. The Mexica searched far and wide, and found this sign near Lake Texcoco. So, they established their city there in 1325 AD. This city would come to be known as Tenochtitlán, the powerful Mexica city.

But Tenochtitlán was initially not so strong even though the Mexica were ferocious warriors. So, for they served as mercenaries for 50 years. Then they served as the tributary of Azcapotzalco for another 50 years.

When everything was going fine for the Mexica, suddenly, things took a turn for the worse. The ruler of Azcapotzalco died. So, his sons started a power struggle among themselves. In their squabble, they killed the Mexica king, considering him a threat to the throne. So, his uncle Itzcoatl, who was elected to be the next Mexica king, decided to seek revenge on Azcapotzalco. So he formed an alliance with Tlacopan and Texcoco, two nearby cities which were also wronged by Azcapotzalco. Together, they defeated Azcapotzalco and killed its princes.

After the war, these three cities expanded rapidly and their alliance gave rise to the Aztec Empire. They subjugated other smaller cities in the area by conquering them or forcing them to surrender and pay tributes. 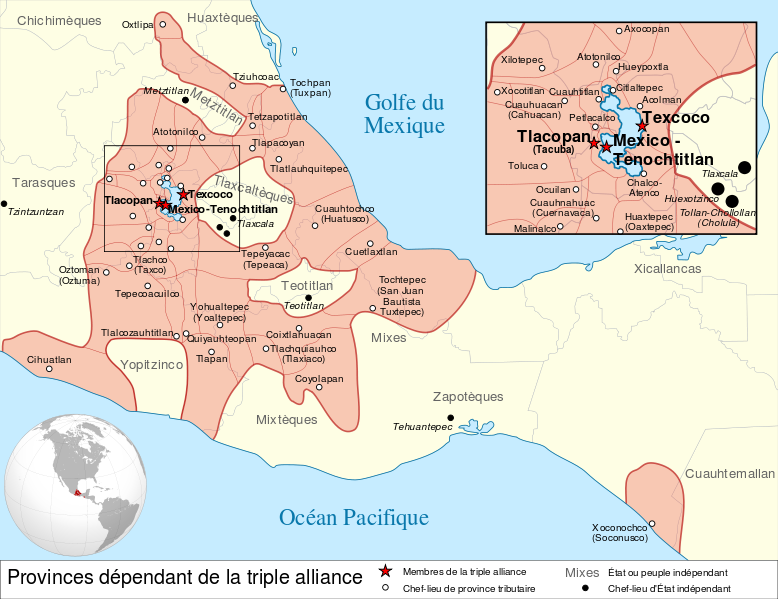 Thus, the Aztec empire grew in size every day. But with increasing size came increasing instability, because the Aztec Empire expanded by bullying other smaller cities. The biggest problem was its lack of a system to integrate new cities into the Empire.

So, the cities that were under the Aztec Empire were always looking for a chance to rebel. Hernán Cortés, a Spanish invader, utilized this instability of the Aztec Empire to gather an army consisting of Native American soldiers belonging to these rebel cities, and defeated Tenochtitlán. Thus, the Aztec Empire fell, and in the place of Tenochtitlán, the Spanish raised a new city, which later came to be known as Mexico city.

The Aztec people were divided into different classes [Citation 3]. Different people in the Aztec society are listed below in terms of the decreasing order of their power in the empire.

The Aztecs prayed to many gods. They believed that they had to sacrifice humans to nourish their gods. They considered it both their duty and obligation to do so. The sacrificed person could go directly where their god lives, and fight in his army. So, people might have considered being sacrificed as an honor and volunteered. But many people who were sacrificed were only slaves.

The nobles in the Aztec society might have also eaten the corpses of the people who were sacrificed [Citation 4], thinking that it will get them closer to their gods.

They might have also sacrificed children to their rain god, believing that their tears would bring them rain [Citation 5].