The Indigenous Peoples of the Americas - Part 4

In this week's episode, we take a look at the Incas, one of the Indigenous Peoples of the Americas.

Would you rather read about the Inca Empire? Click here: The Inca Empire. If the link doesn't work, copy and paste this URL into your browser - https://wisuru.com/history/inca-empire/

The Inca civilization started as a pastoral society around 1200 AD. But it is not clear where they were before that. The Inca did not have a writing system. So, we have to rely on their creation myths [Citation 1]. The Inca passed down these creation myths from generation to the next orally. According to one of these creation myths, they were created by their sun god. He then sent his four sons and four daughters to lead them. But eventually only one of these four sons, Ayar Manco, lived, and founded the Inca civilization. He led the Inca to Cusco, where they settled around 1200 AD.

Cusco, the place where the Inca settled, was located at the focal point of two previous empires. So, the Inca used their infrastructure to expand rapidly.

The Inca first started their expansion under their fourth emperor Mayta Capac. But their expansion really started to gather speed, under their ninth emperor Cusi Inca Yupanqui, also known as Pachacuti. Under his rule, the Inca Empire expanded rapidly. Pachacuti changed the form of governing, by implementing the system of Tawantinsuyu.

Under this system, the capital city Cusco was at the center of the Empire. This is where the Inca emperor lived. It was surrounded by four Suyus on four sides (See picture below).

Each Suyu was further divided into provinces and each of these provinces were further subdivided into Ayllus. Ayllu is a collection of families, which, in effect, acted as a single large family.

While the Inca Empire was regionally divided as explained above, it was socially divided into four classes:
1. Sapa Inca - the Inca emperor
2. Royalty - The Sapa Inca's family and relatives
3. Nobility - People who helped run the empire, like high priests, military officers, artisans, architects, and local leaders.
4. Commoners - Farmers, shephers, and slaves. 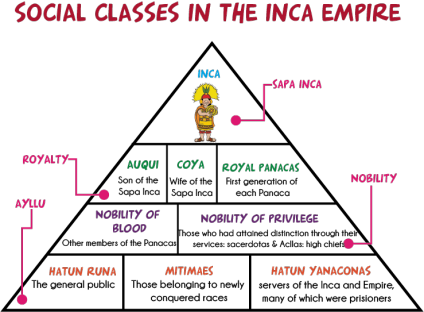 Thus by using a good governing system and a strict social hierarchy, the Inca emperor was able to rule the empire easily.

Factors that contributed to the Inca Empire's expansion

There were several factors that contributed to the rapid growth of the Inca Empire into the largest empire in the world at that time. Some of these factors were:

The downfall of the Inca Empire

Thus, the Inca Empire was prospering greatly in the 16th century. But everything changed suddenly, when the Spanish arrived in Central America. The diseases they spread, reached South America, even before the Spanish reached there.

So, many Incas died. The Inca Emperor, and his crown prince were among them. So, left without an emperor, the Inca Empire was in chaos. A civil war started, many people died, and five years later, a leader emerged. But he was tricked by the Spanish, arrested, [Citation 3] and eventually killed (See painting below).

Without a strong leader to lead them anymore, the Inca Empire slowly disintegrated, and ended in the year 1572.